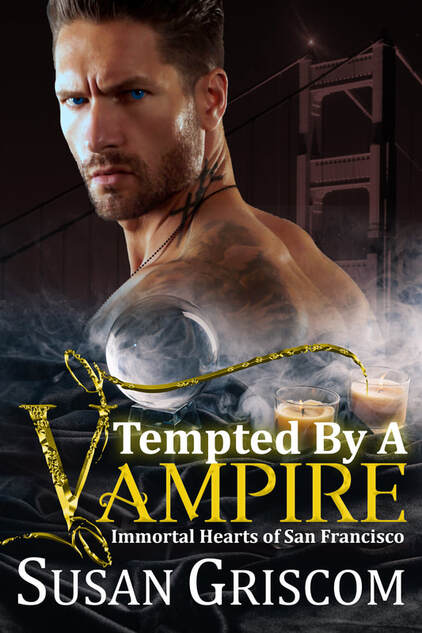 "This hot and sexy Vampire love story is a paranormal dream."

Book 1 in the Immortal Hearts of San Francisco Series

Love lurks around the corner...but it might be too dangerous to pursue.

Everything is just the way Maggie has always imagined it would be with a new job and a new apartment in San Francisco and the best roommate anyone could ever want, her BFF. Everything is perfect ... until her gaze catches the sexy as sin lead singer of the rock band that performs weekly at an elite nightclub and suddenly her whole world is turned upside down.

Cian is a heartthrob rock star--and a vampire. He's every woman's dream, except he enjoys his single life in San Francisco, and has no desire to change....until he meets a human woman he can't resist. The scent of Magdalena's blood has him completely undone, and he begins to question his felicitous existence when his desire for her grows out of control.

A powerful temptation ignites a sizzling passion until a threat from Cian's past wreaks havoc on their lives. Will he be able to resist the temptation in order to save her life?


Buy Tempted by a Vampire to start this sexy adventure today!

“Cian!” my brother whisper-shouted rather abruptly from behind me. I turned to face him. Annoyed.

“Are you ready, man?” he whispered.

“Yes.” Pivoting to face the audience again, my gaze unconsciously snapped back to the beautiful woman sitting at the table in front of me.

“Well, you sure the hell aren’t acting like it,” he said, now standing too close beside me. “We’ve started the set three times, waiting for you to begin singing.”

“Uh. Sorry, Lane. Yeah, let’s go,” I said, tearing my gaze away from her—the raven-haired beauty, Magdalena. Her name flowed through my mind like sweet classical music on a summer breeze with small, graceful birds floating behind it. I tried to focus on the lights in the back of the room, but my gaze always snapped back to hers, as if pulled by some magnetic force.

I had to admit, it had been a long time since my eyes had the pleasure of drinking in such a lovely creature. I wondered if those perfect light brown streaks in her hair were natural. My fingers ached to run through the strands. I wanted to caress her neck. And she smelled fucking delicious.

My fangs involuntarily elongated, and I had to keep my mouth shut so they wouldn’t show as my cock tightened in my pants at the thought of lying with her. When the music started again, I couldn’t move. Singing seemed impossible.

“Cian.” My brother stood beside me again. “Are you, all right?”

I turned toward him. “I need a minute.”

“Jesus. Look at you.” He leaned closer to my ear. “Your fangs are showing and your eyes are silver. Go backstage for a few minutes. We’ll cover for you. Come back when you’ve gotten yourself under control.”

I placed my guitar down, resting it against the stand on the floor and walked off stage. I heard boos and some other derogatory remarks as I headed behind the curtain. I grabbed the bottle of scotch we always kept back there and poured myself a shot. As I let the burn coat my throat, I heard Lane address the audience.

“No worries, ladies. My brother will be right back. I promise. It seems Cian needs to find his voice. It may have become lodged somewhere in his pants.” He laughed, and everyone laughed with him. “In the meantime, we’ll start with this little number I’m sure you all know.”

Great gods of Eros! Now everyone knew I had a hard-on. I supposed that was better than having them see my fangs and eye color change to glowing, silver-rimmed circles. I’d seen beautiful women before, but none of them had ever affected me like this one did.
Fuck me. Her scent was intoxicating. The mentation surrounding what her blood would taste like on my tongue had my libido skyrocketing and clouded everything in my head.

It was a coincidence that I’d happened to walk outside the club to look at the line of people waiting to enter. I’d never done that before, but something had tugged at my gut to be out there. When I saw Magdalena—the same strikingly gorgeous goddess I’d seen sitting at that small restaurant—standing in line with her friend, I’d told Ari, our human friend and confidant, to bring them inside to the front table. After they’d been seated, I couldn’t stay away. I had to go introduce myself. Except now, I was standing backstage with a fucking hard-on.

The band played Time, a Pink Floyd number from the 1970s that we usually performed toward the end of the night. It was one that didn’t require me to sing along, so they could manage it without me. Plus, it was a long song. As the tune played out and got close to the end, my blood cooled, though I still had a semi-erection. I paced to the end of the hall and back again.

The way her soft, brown curls flowed over her breasts made me want to caress the silky strands between my fingers. I wanted to pull them to my lips so I could revel in the texture and smell of the smooth tendrils as they glided across my mouth. I poured another shot glass full of scotch and downed it. Alcohol usually calmed me, dulled some urges, but I feared there might not be enough whiskey in the bottle—hell, the world—to settle me tonight.

I burned for Magdalena like I’d never burned for another. I wanted to bury my cock deep inside her. I wanted to devour her blood to the point of complete and utter satiated bliss. We’re talking possibly comatose. And that was wrong on so many levels.

I knew nothing about her except the way she made me feel, but I needed to know everything about her. Some force inside me needed to touch every inch of her skin, to caress each breast as if they were the first ones I’d ever had beneath my palms. I ached to kiss and taste the vein that pulsed down the side of her lovely throat.

What was it about her that held me entranced?

I took another drink of scotch and entered the restroom. Passing the faceless mirror, I cursed, wishing I could examine myself in the glass before heading back out to the stage.

My eyes still felt deluged with the silver ring around them, but the sensation seemed to be fading some. I took a leak; that helped my boner, and upon blinking a few times, the awareness of the silver in my eyes grew less and less intense. I slid my tongue over my teeth. My fangs had retracted, as well.

​Somehow, I’d managed to pull myself together. As I left the head, I had a fleeting thought that maybe she would be gone. The idea overwhelmed me with both relief and fear. Relief that I’d be able to perform, fear that if she had left, I might not ever see her again.
AUDIOBOOK LINKS
Paid links
Also available from Audible in the following countries