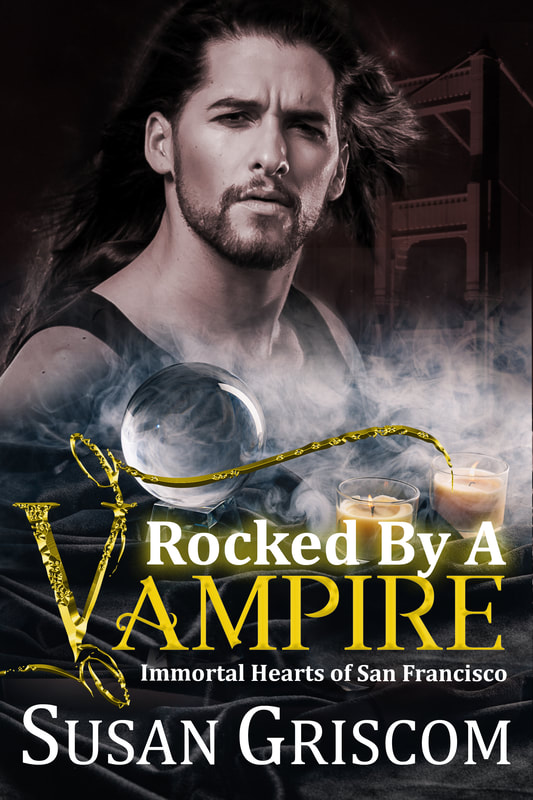 What do you do when your favorite rock star is a vampire?

2017 Roné Award 1st runner up in the Paranormal Romance Category.

​Lane DeMarco is a broken vampire plagued by a horrific past that makes intimacy and trust impossible. His passion for playing music is the only thing satisfying enough to curb his insanity...until Vanessa shakes his life up harder than the San Francisco earthquake. She’s smart, sexy, headstrong, and his desire for her could spiral out of control…except she is a witch. The same witch who once cast a nasty spell on him.

Passion ignites between them as they struggle with deep-seated secrets that haunt them. Can the witch he distrusts tame the destructive demons that torment him? Or will their fervid desires send him deeper into the hell he’s been living in?

This is Book 3 in the Immortal Hearts of San Francisco Series. It can be read as a stand-alone with no cliffhanger, but would be better enjoyed after reading Captivated by a Vampire first.

​Lyrics formed in my mind. Words of lust, regret, pain, and pure, unadulterated love morphed into verses and appeared on the music sheet before me. Intermittent chords flowed from my fingers made tangible by the keys of the grand piano. I jotted down notes as I heard them, sealing them to the words. The pen in my hand couldn’t move fast enough to write.

I’d been writing this song for about six months now. No one knew about it. I only worked on it when no one else was around. At the time, I’d thought it would be a good idea to put my emotions down on paper, but now, I didn’t know anymore. Every time I read them, a sick feeling gnawed inside of me, chomping away.


It was a ballad, a love song, a sad song. A brooding tune. A melody that no one would probably ever hear. Just my morbid form of meditation needing an outlet. At least that’s what I told myself.

I wasn’t always easy to get along with these days. I knew this. No one had to tell me. And I found it particularly difficult when it came to certain people.

I’d had my share of relationships, or should I say my share of women. In all my two hundred and twenty years, I didn’t think I’d ever had a serious relationship with a woman. Vampire or human.

Some might call me a monster. But does a monster have a conscience? Or know regret? Fear the absence of dignity? I’d been on this planet for a long time. Long enough to know that there was no remedy for self-abhorrence. No therapeutic massage or bath crystals could ever tame the imprints of depression as they embedded their way into each and every one of my nerve endings on a daily basis.
Rock and roll was my life. I lived it, breathed it; it was my salvation. Music had always been a part of me. Without it, I might as well dig a hole in the ground and cover myself up with dirt. Though that wouldn’t kill me. Only aggravate the shit out of me.

There was nothing but silence now. The notes and words stared back at me, waiting for something more. But I had nothing. Nothing to complete the verse, nothing to make the pain go away. I gazed at the ivory keys as if they could magically give me what I needed. I stroked my hand over them in hope.

The piano, the main focal point of the large living area, was the one thing I’d insisted we purchase when we bought this mansion about seventy-five years ago. It had called to me, but back then, it had probably called to my brother also. We were alike in that way.

Voices filtered in from just outside the room, and I quickly gathered up the music sheets, tucking them inside my shirt for safekeeping—or hiding if I was being honest about it.

Shoving myself away from the ivory keys, I strolled to the iron blinds imprisoning us and waited.

Without a word, two bodies came to stand next to me. In a not too distant past, there had been only one. Then my brother Cian had found what he called his soul mate. Who was I to argue about that? So, this was our nightly ritual—stand in front of the iron blinds at sunset and wait for the ugly things to rise and give us our freedom from the daytime prison we existed in.

“I think we should do away with the blinds,” Cian said, sounding ridiculously serious. He had one arm around Maggie and a tumbler of scotch in his free hand. His torn jeans left one knee completely exposed, and the ragged edges of the hems skimmed the top of his bare feet. His shirt hung open, revealing his muscled chest covered in tattoos. I’d heard many ladies utter that my twin had the body of Adonis. I did a mental shrug at the thought. Maggie leaned against him dressed similarly, only her jeans had more holes, and her purple-flowered blouse remained buttoned, but flowed loosely at her waist. Her dark brown locks cascaded over her shoulders in messy curls, giving her that just fucked looked. I smiled. Glad my brother was happy.

“I think love has seeped into your brain and replaced the ventricles with giddy, stupid shit,” I answered.

Cian chuckled. “I won’t argue with that. But I think it’s time for a change. One-way reflective glass.” He said the last part like it was an answer to a question no one had asked.

I gave him a raised eyebrow of interest. “Like mirrored glass?”

“There’s a material that’s supposed to block ninety-nine percent of the sun’s ultraviolet rays. That would be enough to protect us.”

“We could start with one window and see what happens,” Maggie added in her adorable, female, take-me-to-bed-and-fuck-me voice that was hard to say no to. I knew my brother couldn’t. Which made me somewhat skeptical about just whose idea this was.

“If you want to pretend you’re outside during the day, just go to the artificial sunroom you made.” How many more things was Cian going to change or add to this mansion just to please his woman? This was my house, too.

“She’s right, Lane. These old eyes of ours have been too long in the dark. I think we should give it a try. At least one window to see.”

Fuck. Maybe I was just too broody today. “One window,” I agreed. “But don’t count on me when it comes time to test it out. I know what it’s like being caught out in the sun. The amount of time it takes to become completely incapacitated is seconds. Not a fun day in my book.”

“I’ll try it first,” Maggie said, and I gave her a sideways glare that she didn’t catch.

“No. I will,” my twin, the goddamn hero said. He was six and a half minutes older, but we were as different as fire and water.

“But if it’s me, Ari won’t have as hard a time picking me up if it doesn’t work,” Maggie countered.

“She’s got a point, brother.” I grabbed the drink from his hand and took a sip while he frowned at me. But he didn’t stop me. “You should have brought me one,” I said as I handed it back to him. Ari, our mortal friend, our treasured human confidante, took care of all the things that we couldn’t in the daylight. The sun wouldn’t kill us, but it hurt like a motherfucker. If Maggie were to become ill from the sun’s rays, I’d be sad, but not as devastated as if something were to happen to Cian. Maybe I was a cold-hearted bastard, but I was only being real.

“Hey, you’re all up. Great! I have some good news and some bad news.” The sweet, lyrical voice that belonged to the ‘good and bad news’ was Vanessa. I squeezed my eyes shut at the sound of her sensual vocalization, wishing she would just go away. She wasn’t only Magdalena’s best friend, she was also a witch. Being human was bad enough, I didn’t need the extra added irritant of a witch hanging around.

“Oh, good. The witch has some news to share. Perhaps we should all grab a drink so we can listen without choking on our own saliva at the usual absurdness,” I said flippantly. But in truth, my statement only represented my unwarranted feelings toward the woman; however, a drink was most definitely required if I were to stay and listen. Which I shouldn’t. But I would, because now that she was here, all I wanted to do was stay. Bask in her delicious smells, the melodic sound of her voice, her slender and shapely legs. Though I pretended not to notice her, I never missed a thing about her. I walked over to the credenza and poured myself a generous two fingers of scotch; then added in a little more for good measure.

The witch’s blonde hair was too thick, with long, beautiful curls dyed a pretty, vibrant pink at the tips. Her eyes were too green and bright, I could practically see myself in them. Her lips were too plump and always looked ready to kiss. The curves of her body tormented me, especially when she wore those skintight workout pants she always seemed to parade around in. Tonight, she wore a short, emerald-green skirt that brightened the color of her eyes even more. It didn’t help that her top was low-cut, dipping down to the center of her abdomen, giving me a hint of the lean, tight muscles of her stomach that I ached to run my tongue over. Even her last name sounded decadent and sinful. Creamer. It was very difficult to keep my cock from growing stiff as a board inside my pants whenever I was around her.
​
But I had rules. No humans, and especially no fucking witches.
Get Your Copy Now!
(Paid Links)

Get it in Audio:

Get the Paperback!
*As an Amazon Associate I earn from qualifying purchases.

*As an Apple Affiliate, I earn from qualifying purchases. Rocked by a Vampire is an independent publication and has not been authorized, sponsored, or otherwise approved by Apple Inc.