Media Kit for Ignite the Flame 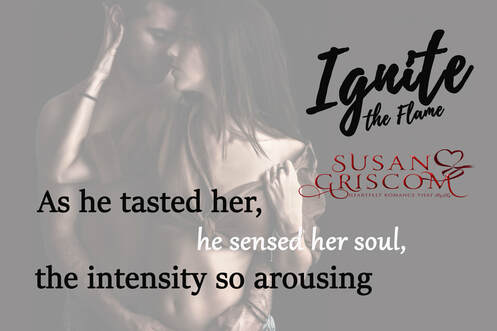 First in Series and it’s FREE

He can take her anywhere her heart desires, but she can bring him to his knees with the gentle flick of her finger.
When the tragic death of her father brings Addison MacKenna back to the town where she was born, she can't understand the strange sensations that have begun to consume her. Plagued with nightmares of her father's sudden and brutal death, Addie struggles with her anguish and refuses to believe that his demise was accidental.
But that's not the only thing Addie struggles with.
Caught up in the horrors of her latest nightmare while driving to work one day, she's startled beyond comprehension when she almost runs down a man standing in the middle of the road. A gorgeous, stunning man she can't seem to take her mind or her eyes off of. All of a sudden, the impossible seems possible, and it's not clear whether that's a blessing or a curse.
Cael Sheridan may be arrogant and mysterious, but he's also undeniably gorgeous. A member of a secret society, he is sworn to protect the woman he believes to be the daughter of his recently murdered mentor. In the process, he finds it impossible to resist her magnetic sensuality, complicating his efforts to shield and guide her as she learns to manage her newly acquired skills. He's faced with the tough decision of whether to let her in or sabotage their new relationship in order to keep her safe as well as his own heart.
Fate has brought them together, but will it make them stronger or destroy them in the end?
A supernatural, urban fantasy sure to get your blood running hot, "Ignite the Flame" is the first book in the Sectorium series set in a sleepy coastal town along the Oregon Coast. (Note: Previously published as Whisper Cape and has been re-titled an enhanced for a more enjoyable read).

The eerie wail of the howling wind sent shivers down Addie’s spine. Pulling her jacket sleeves down over the palms of her hands, she gripped the steering wheel to hold it in place. Thank God the heater worked. The vicious cold air outside mixed with the fog floating in from the ocean, enveloping her truck, filling her with an ominous sensation. It swirled its way over the landscape, transforming the spectacular terrain into something unfamiliar. Sinister. The late morning haze shrouded most of the highway, snaking its way through the massive redwoods, stirring visions of her nightmare. The roar of the surf thrashing against the rocks emphasized the menacing force.
he shuddered. Her breath quickened. Hot and tingly blood pulsed through her body, swamping her with a sense of dread. The force strengthened and burned as though her veins were on fire.
Addie inhaled, holding her breath for a few seconds before exhaling. “Deep breaths, Addie, slow, deep breaths,” she whispered as the memory of the horrible nightmare flooded her mind.
She concentrated on her breathing, feeling the rapid beat of her heart, determined to steady her nerves.
Think of something else,” she demanded and glanced down at her camera and tripod. She’d remembered to bring them along today, hoping the sun would come out so she could go to the cliffs during her afternoon break, still determined to decorate her bare apartment walls with pictures of the giant waves crashing against the massive rocks. She grimaced, leaning forward to peek at the sky, perturbed the sun wasn’t going to cooperate.
Addie turned her concentration back to the road. One wrong turn could be fatal if her truck were to swerve and go over the cliff. Her new truck—well, new to her anyway—was sturdy and powerful, exuding confidence and strength, the exact attributes Addie needed at the moment.
She absently tapped her fingers on the steering wheel. “Another cloudy day. I should have taken pictures during the summer months, like any other normal person.” She glanced up at the sky again before bringing her eyes back to the road.
That was when she saw him standing in the center of the highway.
She screamed, grasped the wheel with both hands, and steered to the right. The truck lurched. Her camera and tripod clunked against the passenger door and then fell to the floor. Addie tried to straighten the wheel, but the gravel on the side of the road sent the wheels spinning toward the ditch. She slammed on the brakes, skidding several feet before finally stopping inches from a very steep slope.
“Oh, God … did I hit him?” She’d heard a thump against the truck. “I must have hit him.”
Her hands shook. In fact, her entire body trembled with fear. Forcing her uncooperative limbs to move, Addie shoved open the heavy truck door, held on to support her quivering body, and stepped out. Her rubbery legs buckled under her as the fierce wind blew her jacket open. Steadying herself, she used both hands to keep it closed and crept to the back of the truck, scanned the area, but saw no one. Not even a hint of a body.
She called out. “Hello? Sir, are you all right?”
No one answered. The silence was disturbing, as if something had sucked all evidence of life out of the area, leaving nothing behind except the sound of the wind rustling through dead leaves and the surf pounding against the rocks below.

The sky became a palette of purple and orange hues, all swirled together through the haze as the sun set over the horizon. As they headed back toward the house, they stopped to admire the miraculous view.
“It’s so magnificent. It’s hard to imagine there could be something so evil in the world.”
Addison turned to face Cael.
“You’re freezing. We should get back inside.” His voice was husky and he cleared his throat as he rubbed his hands up and down her arms.
She reached her hands up to his face and gently pulled him to her, his lips covering hers as she pressed her body against his. Her mouth was warm and accepting. He held her close, the irresistible rise of passion stirring inside, and he knew she could feel his excitement. His hand slipped inside her jacket and cupped her breast.
Forgetting everything except her, he wanted her with a fierceness he had never experienced before. She moaned softly as she tangled her fingers in his hair while his tongue glided down her neck. She shivered as he kissed her softly.
“God, you smell delicious,” he said, pulling her jacket aside as his lips and tongue skimmed down her collarbone. “Addison, I want you so much.” He brought his face back up, covering her mouth with his. As he tasted her, he sensed her soul, the intensity so arousing he was losing control. Forcing himself to stop, he lingered at the spot under her earlobe.
“Not here.” His voice was husky, his breath ragged. “Let’s go back to the house before we have an X-rated scene on the beach.”
They’d barely made it in the house before he was pulling her to him again, covering her with more hot kisses. As they struggled to get their jackets off, Addison’s hand slipped and hit his gun. “Here, wait.” He unbuckled the holster and let it fall to the floor. They tugged at each other’s clothes with an uncontrollable frenzy. She unbuttoned his shirt, and he shrugged it off and onto the floor. His mouth came down on hers hard and she wrapped her arms around his waist, her fingers pressing into his back. He tugged her top up and she lifted her arms as he pulled her blouse over her head without even unbuttoning it.
He kissed her neck, brushing fluttering little kisses down to her shoulder. “God, Addison, you’re doing some major damage to my self-control. Since I first laid eyes on you, I’ve dreamed of this. You’re so sexy. I can’t keep my hands off you.”
He cupped her breast in his hand and covered her mouth again with his. Wrapping her arms around his neck, she moaned, and he scooped her up, cradling her in his arms as he carried her upstairs.
He laid her on the bed and stretched out on top of her, kissing her lips, then her neck, grazing her throat with his teeth, his tongue tasting the salt from the ocean breeze still lingering on her skin.
“You’re making me crazy. I can’t breathe, Cael.” Her breath warm on his neck, she ran her nails down his back, trembling beneath him. 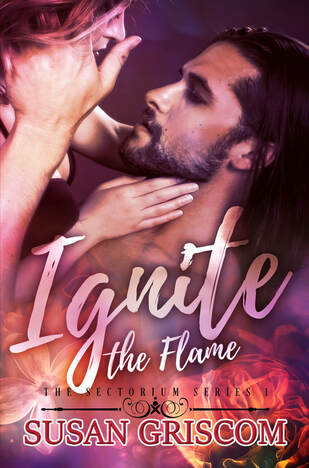 Other books in this series: