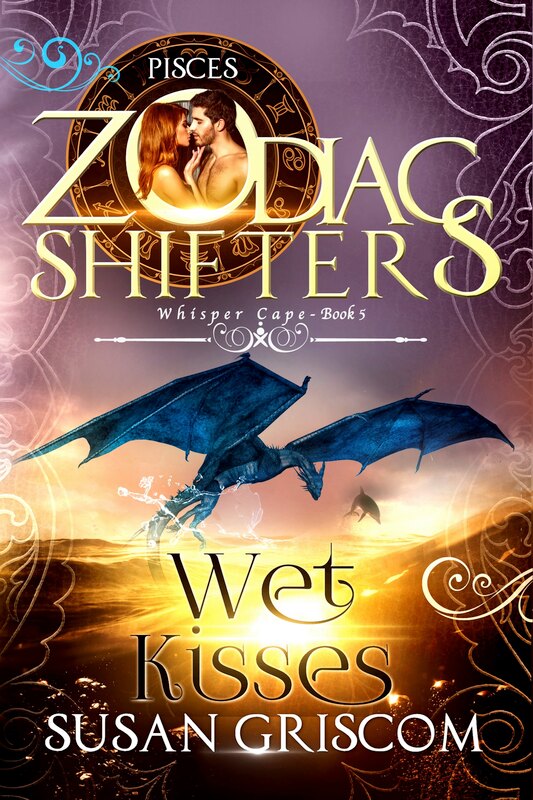 ​I’ve wanted to write a dragon book for some time now and Wet Kisses was a joy to pen. I fell deeply in love with Adrian while creating his character and I hope you do too. His wet kisses, as well as his wet scales, have been in my dreams for months now and I hope they will find their way in yours.
Adrian Marlowe is a dolphin-shifter who can shift into a dragon, a new and dangerous development to his shifter abilities. Now he’s gone from wealthy CEO to man on a mission: Figure out how to tame the dragon before it destroys him.

Landing the job as the new project manager in charge of the interior design of Waterscape’s new underwater hotel is Reese Briden’s dream job come true. Until she meets the sexy CEO and escaping the sexual tension that arises between them becomes impossible. Adrian could be the perfect lover. Except for one flaw. Well, maybe it’s not really a flaw, more of an inconvenience, because he is her boss.
​
Reese is feisty, beautiful and confident, and she might even be Adrian’s mate, except…she doesn’t know about the dragon. Now he has to decide whether to reveal himself or risk losing both her and his corporation. However, he just might lose himself if he lets the dragon consume him.
​
Add it to your Goodreads TBR list.
​Get it now!
Apple Books |  Amazon US | Amazon UK | Amazon CA | Amazon AU | Kobo Books
Barnes & Noble |  Zodiac Shifters Website | ​GooglePlay
Also available in Audiobook
Apple: https://books.apple.com/us/audiobook/id1509230683
Audiobooks.com: https://www.audiobooks.com/audiobook/wet-kisses-a-zodiac-shifters-paranormal-romance-pisces-the-sectorium-series-book-5/431718
Chirp: https://www.chirpbooks.com/audiobooks/wet-kisses-a-zodiac-shifters-paranormal-romance-pisces-the-sectorium
Google Play: https://play.google.com/store/audiobooks/details/Susan_Griscom_Wet_Kisses_A_Zodiac_Shifters_Paranor?id=AQAAAEDs1AqU9M
Kobo, Walmart: https://www.kobo.com/us/en/audiobook/wet-kisses-a-zodiac-shifters-paranormal-romance-pisces-the-sectorium-series-book-5
NOOK Audiobooks: https://www.barnesandnoble.com/w/wet-kisses-susan-griscom/1127928277
Scribd: https://www.scribd.com/audiobook/457711721/Wet-Kisses-A-Zodiac-Shifters-Paranormal-Romance-Pisces-The-Sectorium-Series-Book-5
Libro.FM: https://libro.fm/audiobooks/9781662218194
Storytel: https://www.storytel.com/se/sv/books/2787770
BingeBooks: https://bingebooks.com/book/wet-kisses-a-zodiac-shifters-paranormal-romance-pisces
hoopla: https://www.hoopladigital.com/title/13382558
​

CHAPTER ONE
Adrian
Gentle waves broke before me, and white foam lapped over my toes. A warm front from the north blew over Kauai’s lush, mountainous regions to the beach and feathered its way down my back. The warmth brought a serene awareness, and I craved the vitality I knew the water would provide. I glanced back at my house nestled into the cliffside above me.
Just a short hour ago the mansion had been bustling with music and laughter, people fraternizing and drinking. Many danced while a deejay played their favorite songs. Everyone chimed in for the countdown to midnight as the New Year rolled in with its promises of love and prosperity, giving all new hope with the prospects of what the future may hold. To most, good fortune. To me, an uncertainty that ached in my bones. The prophecies of long ago whispered of a mate who could temper the impulsions that grew within me, constantly begging for release. A mate I’d yet to meet. A mate I’d come to believe was just a myth.
The house sat quiet now. It was well past four in the morning by the time the last of the guests said their farewells and well wishes for the New Year.
A deep growl formed in the pit of my stomach and the tattoo etched on my left breast shifted just enough to make me aware of its impatience. The beast wanted out.
I shrugged off my shirt as I stood at the water’s edge, itching to submerge my body into the cool dark waves and allow the sea to claim me once again.
I threaded my way into the blue tranquility of my salvation and dove under the swell of water cresting before me, instantly transforming into the smooth, thick tubular chassis of the dolphin I usually formed to take me out into deeper waters.    This was the fun part, the playful side of myself. The more controlled and logical one, appeasing the emotional turmoil that sometimes ran havoc through my Pisces soul. This torpedo like form allowed me to swim fast, my speed probably about twenty miles per hour. I normally swam at about six miles per hour; however, on this first day of the new year, I was in a hurry, needing to reach the deep darker sea where I could transform into the beast my body craved to be. The craving grew more intense each day like I was addicted to a drug.
The sea was calm, yet I sensed a storm brewing from the south. I popped my head above the surface and noticed a light in the distance; it was one of those island cruise ships. I sank back below the surface. Was I too close to the boat? Would they see me? I fought hard to contain myself, but I lost the battle as the beast inside me formed. Water dripped from my wings as I soared into the dark, cloudy sky, leaving a swell of water about twenty feet high in my wake. No one could have seen me from the boat. I’d been far enough away, and the clouds made a great cover, yet as I flew, the shrill squeal of a scream pierced my ears.